Who is Ian Cresswell?

Ian Cresswell, founder of Lonescout Bushcraft, has been connected
with the outdoors for over 40 years.

It could be said to have started with walks down Pigeon Hill and up the Old Hills with his grandparents, then as he got older playing in Castle Woods, watching the wildlife from wood ants to sparrow hawks. He had to wait until he was seven before he started his connection with Scouting by joining The Cubs (there were no Beavers at the time), not long afterwards attending his first camp. Although homesickness was an issue during his Cub years and even into his first Scout camp, age and experience put paid to this demon. Ian was fortunate to learn the basics of camp craft in Cubs and Scouts before moving on to Venture Scouts, which was more activity oriented (a portent of where Scouting appeared to go during the 80s and 90s) and becoming a Young Leader with a local Cub pack.

During this time Ian went through school doing OK at ‘O’ level but struggling at ‘A’ level (an understanding of why that was the case came during his Forest School Leader training). On leaving the 6th form Ian spent a few months labouring for a local builder pending the start of Basic Training in the REME. After serving 101/2 years in the Army, the majority of which was with BAOR and included active service on OP Granby, Ian decide the time was right to move on. Upon his return to ‘civvie street’ Ian had a short spell as a driver/drivers mate for a local luxury chocolate manufacturer, then entered a 14 year period as an HGV mechanic for a main dealer.

Within weeks of leaving the Army Ian was contacted by his old Scout Leader to help out at his old Troop. Scouting had helped make Ian who he is so this was a great opportunity to start to ‘give something back’. So started his second, and current, time with the Scouting Association being involved in the roles of Assistant District Commissioner (international) and Training Advisor. This lead to the forming of Lonescout Bushcraft Ltd. As part of the Scout programme Ian was delivering ‘traditional camping skills’ these included elements of survival skills and bushcraft skills. As a way of assessing his own skills and learning new skills to pass on Ian went on an OCNEMR accredited course with a bushcraft school, subsequently Ian was invited to become an instructor at that school.

During the next 5 years Ian was very closely involved with the company eventually becoming a director as the company ‘went limited’. Inspired and encouraged by established members of the bushcraft community, Ian formed Lonescout Bushcraft Ltd. so that he could make the most of opportunities coming his way.

Realising that his bushcraft skills were a tool with which to engage with others, and perceiving a gap in his provision, Ian (at the behest of a close friend) began investigating Forest School. Working as a helper with an established Forest School provider he saw the incredible value of longer term (when compared to the typical bushcraft course) exposure of youngsters to the woodland environment.

Inevitably this led to Ian becoming qualified as a Level 3 Forest School Practitioner in 2011.

Ian has been married to Vicky since 1983, a feat in itself for which Vicky deserves a whole host of medals! They have shared many adventures together and without her continued support and friendship Ian would not be the man he is today.

For those of you who have waded this far through the diatribe, well done! You may now have an idea of who Ian is. 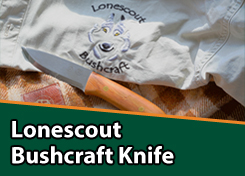